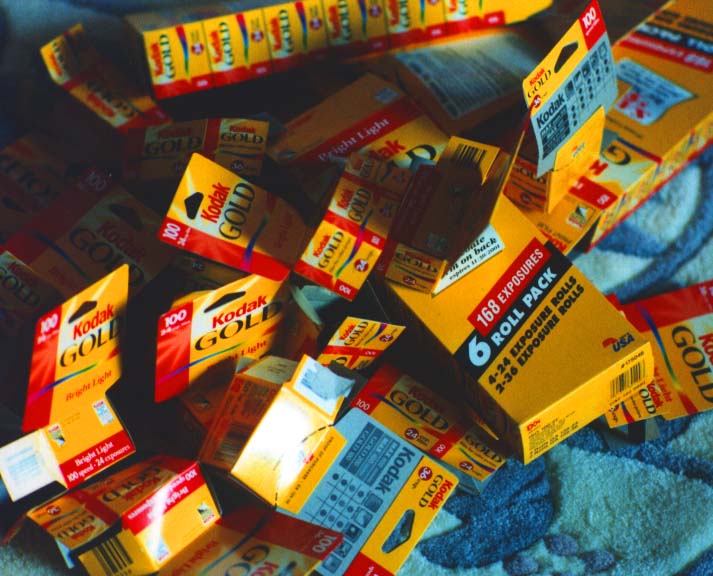 Of all the hundreds of films on the market available to photographers for every conceivable photographic situation, There are really only two kinds: Fast and slow.

Film speed is rated as ISO or ASA on the box
Fast film is any film rated at 400 or more
Slow film is rated at 100 or less
You can also buy a 200 film that is inadequate in all situations. It has all the drawbacks of both fast and slow film and none of the advantages. It was made for Grandma's Kodak Instamatic camera and has no place in the 21st century.

Fast film is very sensitive to light and records the image very quickly making it the film choice when photographing in low light situations or when you want to stop action. Just a note here about fast film and sports. There is nothing that looks dumber to me than some athlete or racing car, frozen in a frame. Move your camera with the subject so the background blurs and you get some sense of action.  The drawback to fast film is that it has a coarse grain in the print and will not enlarge well (over say, 8 x 10) because of this grainy effect.

Slow film on the other hand has very little grain in the print and is therefore everyone's choice whenever lighting conditions permit.

Now you have to choose your format: Black and White, Color print or Color slide. and then you have a multitude of other choices you can make in terms of color balance, saturation, and latitude.

Latitude can be thought of as level of forgiveness. How bad can you screw-up before you lose the picture altogether. Most consumer films have a lot of latitude in that you can over or under expose the negative and still get a pretty good image. Professional films and slides in particular, are much less forgiving and quite a bit more expensive.

There are several films, mostly slide film, that over-saturate colors like in those photos you see of the very tan model in a neon colored bikini. Which brings us to color balance.

Most color films you will see are "Daylight Balanced". This means they see true colors in daylight or with most on-camera flash units. Almost all strobe lights are daylight balanced. You can also buy Tungsten Balanced film for use in tungsten light, but your choices of film speed will be limited.

While color balance could be a class in itself.  there are just a couple of things you really need to understand to keep from making the classic beginner's mistakes.
Assuming that you will almost always be using Daylight film you must be aware that:
1. If you shoot a picture in a room that is lit by fluorescent light your picture will be green.
2. If you shoot a picture in a room lit by light bulbs, your picture will be red.
3. If you use an on camera flash in either of these situations your picture will be color correct. If you must shoot indoor, without a flash you can compensate for the green or red with color filters over your lens. A blue color filter will take out the red, and a magenta filter will take out the green.